From these peaks the gaze is free to range over a good stretch of central Italy. To the west the sea of Umbrian hills and reliefs and in the background Mount Amiata in Tuscany. To the north-west are the Petrano and Nero mountains, the foothills of the Alpe della Luna and in the distance the reliefs of the Casentino, to the north the Montefeltro. And then the blue of the Adriatic Sea and the green of the Conero in the east, and the imposing Sibillini chain in the south.

At the foot of the Catria, in a basin hidden between woods and rocky cliffs at about 700 m. altitude, there is the millennial Camaldolese monastery of Fonte Avellana sung by Dante in the Divine Comedy in the XXI Canto del Paradiso: "tra due liti d’Italia surgon sassi….e fanno un gibbo che si chiama Catria di sotto al quale è consacrato un eremo…".

Mount Catria with its iron cross and the Acuto, which form a large saddle when viewed from a distance, serve today as yesterday as a reference point for the people and populations of the surrounding valleys. In particular, that of Cesano formed by the stream of the same name that originates on the eastern slopes of the mountain and for the Umbrian ones. Stories of monks, saints and bandits; ancient trees (the Badger, Taxus baccata of Fonte Avellana) mythical animals (the wolf, the golden eagle, the wild cat and the geotriton); testimonies of ancient prehistoric animals, glaciers: all this and more represent the Catria and Acuto mountains and their extraordinary ecosystem.

By contacting the local guides it is possible to walk the various paths and make demanding or affordable excursions. 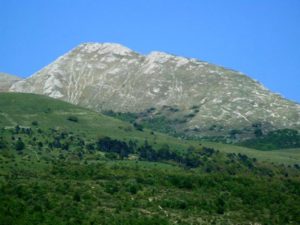 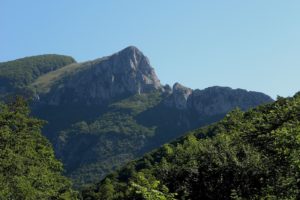